New Delhi: Two criminals were gunned down in West Delhi’s Dwarka area on Sunday afternoon in a case of inter-gang rivalry. One of the criminals was shot dead by rival gang members while the other died after suffering bullet injuries during a shootout with police.

According to the police, the gang war between Manjeet Mahal gang and Nandu gang led to a shootout when a member of Mahal’s gang Praveen alias Golu was shot at by at least four members of the Nandu gang. “Praveen is believed to be the financier of the Mahal gang and was travelling towards Dwarka Mor metro station when suddenly three men in a car and two bike-borne men opened fire at him,” said Joint Commissioner of Police (Western range) Madhup Tiwari.

An eyewitness said the accused initially could not target Praveen so one of them identified as Vikas Dalal got down from the car, reached Praveen’s car and fired three rounds at him from a very close range. However, the sound of the gunshots by Dalal were also heard by a constable in a PCR van across the road, who ran to the crime scene with his service rifle. The constable warned the accused to put his gun down, but he alleged that the accused starting firing at him instead.

The constable then retaliated with three rounds of fire, which injured Dalal and his associate. “The constable had asked the accused to drop their weapons but when the accused fired, he had to retaliate. Two of the accused received injuries and were taken to a nearby hospital,” Tiwari added. Though the rest of the attackers were able to escape, Dalal, his associate and Praveen were taken to a nearby hospital where Praveen was declared dead while Dalal succumbed to his injuries during treatment.

Mumbai: Shiv Sena on Monday took a dig at Andhra Pradesh Chief Minister N Chandrababu Naidu and mocked his efforts to form a non-BJP government at the Centre. The TDP chief’s deliberations are part of his efforts to unite non-NDA parties and bring them together on one platform.

“There are at least five contenders for the Prime Minister’s post in Opposition. There are more chances of their disillusionment (mohbhang). Who will form the government? This question has already been answered. Amit Shah said that BJP will win 300 seats and the party reached that target in the fifth phase of the Lok Sabha elections only,” Shiv Sena said in its editorial mouthpiece ‘Saamana’.

“Why Chandrababu Naidu is exhausting himself without any reason? Hope his current excitement last till May 23. We wish him luck for the same,” the party added. TDP chief Naidu in the past week undertook a hectic round of discussions with parties opposed to BJP when he met leaders including Congress president Rahul Gandhi and Mahagathbandhan leaders — Samajwadi Party chief Akhilesh Yadav, NCP chief Sharad Pawar, AAP chief Arvind Kejriwal and Bahujan Samaj Party supremo Mayawati.

Naidu is on a mission of rallying opposition parties in a bid to keep the BJP out of power, in case its numbers fall short of majority considerably. Naidu also met CPI leader Sudhakar Reddy and Loktantrik Janata Dal leader Sharad Yadav. Notably, BSP chief Mayawati was too expected to meet with Congress’ top rung, however with exit polls giving a clear verdict in favour of the BJP and Prime Minister Narnedra Modi’s leadership, Opposition leaders may change their plans and prefer to wait for the results on May 23.

New Delhi: With most of the exit polls predicting a majority for the NDA, former Maldives President Mohamed Nasheed congratulated Prime Minister Narendra Modi, hoping that the island nation would continue to have close cooperation with the BJP-led government.

“As Indian polls close, congratulations are in order for @narendramodi and the BJP. I am sure the Maldives people and Govt will be delighted to continue their close cooperation with the PM and the BJP-led Govt,” Nasheed wrote on his Twitter handle on Sunday. In November last year, Modi had visited the Maldives to attend the swearing-in ceremony of President Ibrahim Mohamed Solih after he surprisingly defeated Abdulla Yameen in the presidential polls.

During Solih’s visit to India in December, New Delhi had announced financial assistance of USD 1.4 billion to Male. Nasheed’s congratulatory message comes even as the counting of votes in the seven-phase Lok Sabha elections will begin on May 23. Several exit polls on television channels have projected that the BJP-led NDA will retain power at the Centre with most pollsters giving Modi a clear majority again in the 543-member Lok Sabha.

Three exit polls including that of CNN News 18-IPSOS and India Today-Axis My India have predicted the NDA will retain power at the Centre with over 300 seats. In the 2014 general elections, the NDA got 341 seats of which BJP alone accounted for 282 seats. The UPA had 60 seats of which 44 were won by the Congress.

Odisha (India): The Superintendent of Police on Friday said he does not have any clue about the case where a 15-year-old girl alleged that four police personnel from Jharsuguda raped her. “We got to know this through media reports and immediately contacted Telco police station. We have not received any clue yet, it is to be ascertained if they were from Jharsuguda or Jamshedpur. We have asked Telco police for clues and will take action,” Aswini Mohanty, Superintendent of Police, Jharsuguda told reporters here.

The girl has filed an FIR in Jamshedpur’s Telco police station against four policemen from Jharsuguda for allegedly raping her.

Unnao (Uttar Pradesh): Five people lost their lives and more than 30 were injured in a bus accident on the Lucknow-Agra expressway on Saturday.

The accident happened near Devkhari village which comes under the Bangarmau police station. The incident happened when a bus carrying passengers from Delhi to Bihar overturned after ramming into a tractor trolley.

More than a dozen injured people have been referred to the Lucknow Trauma centre for further treatment. Further details in this regard are awaited.

Kedarnath (U’khand): Prime Minister Narendra Modi Saturday offered prayers at the Himalayan shrine of Kedarnath, a day after campaigning for the general election came to a close. 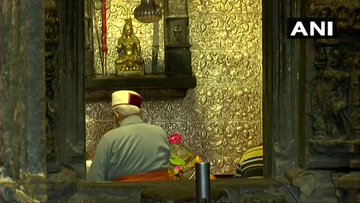 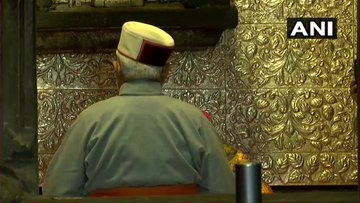 He reached Jolly Grant airport this morning. Stringent security arrangements have been made for the prime minister’s visit, DGP (law and order) Ashok Kumar said. This is Modi’s second visit to the temple in the last two years. Modi will offer prayers at Badrinath on Sunday. The portals of the both the shrines were reopened for devotees after winter break early this month. The campaigning for the seventh and the last phase of the general election ended Friday evening. The Election Commission gave its nod to the visit while “reminding” the prime minister’s office that the model code of conduct is still in force.

25-year-old shot at for marrying woman from same ‘gotra’

New Delhi: A 25-year-old man sustained a bullet injury following an argument with the relatives of his wife who were against their marriage as they belonged to same ‘gotra’, police said Wednesday. The couple eloped and got married in November last year, police said, adding that the two were staying in Matiala in West Delhi after their marriage.

The incident took place on Tuesday in Uttam Nagar area at around 10.30 pm when Bobby, a first year student at a college here, was stopped by his wife’s brothers Nitin (26) and Neeraj (30) while he was returning home. They thrashed Bobby and shot at him. The bullet, however, brushed past his elbow, police said.

He was rushed to the Deen Dayal Upadhyay Hospital, where his condition was stated to be stable. The two accused were absconding and efforts were underway to nab them, police said.

BMC official among 15 held in raid at dance bar

Mumbai: At least 15 persons, including a senior official of the Brihanmumbai Municipal Corporation (BMC), were arrested following a raid on a dance bar in Colaba at South Mumbai early on Wednesday, police said.

The raid was conducted at the Platinum Bar and Restaurant by a special team of additional commissioner of police South region, comprising local police around 12.30 am, an official said. “During the raid, police arrested nine members of the hotel management staff and six customers, which includes an officer rank of deputy municipal commissioner,” he said.

A businessman, a government official and some high profile persons were among those arrested, he said, adding that the female staff of the bar was let off. The action was taken under different IPC sections and the Maharashtra Hotels Establishment Act, he said. All the accused were produced before the court, which released them on bail, he said.

Mumbai: Three persons, including two children, were arrested for allegedly assaulting a state-level rowing champion in Nashik, police said on Wednesday. The incident took place near Chopda Lawns in Nashik city on Tuesday night, when Nikhil Sonawane, a state-level rower was returning home on a bicycle with his friend, an official said.

“The three attackers stopped his bicycle on the pretext of seeking tobacco from him. Thereafter, the trio started thrashing him,” he said. One of the accused attacked Sonawane with a sickle, in which he sustained serious injuries, the official said. After the attack, the attackers fled from the spot. The victim was rushed to a nearby hospital. He is undergoing treatment and is out of danger now, the official said.

Sonawane, who has won state-level rowing championships, was expected to participate in another such event between May 17 and 19 at Army Boating Club in Pune. He had earlier won gold and silver medals in this competition, he said. An offence was registered against three persons at Panchavati police station under section various sections of the IPC, the official said.

“During the investigation, police arrested a 21-year- old man, identified as Deepak Sukhdeo Dhagle, and his two minor aides,” the official said. The two juveniles have been sent to a children’s home, whereas Dhagle will be produced before a court on Thursday.

The last round of polling in the Lok Sabha elections is to be held on Sunday. Election results are likely to come on May 23, but political enthusiasm has increased due to the formation of the government before that. It is news that UPA Chairperson Sonia Gandhi has written a letter to the Third Front leaders.

According to sources, Sonia Gandhi wrote the personal letter to UPA and non-NDA party chiefs. In this, he has invited all the leaders to join the meeting on May 23 in Delhi. Madhya Pradesh Chief Minister Kamal Nath has also spoken to the Chief Minister of Orissa, Naveen Patnaik.

Explain that the opposition is constantly trying to keep NDA out of power. It is being said that 22 opposition parties will meet in Delhi on May 21. In this they will discuss the alliance. Many leaders of South India include Chandrababu Naidu, K Chandrasekhar Rao, HD Kumaraswamy and Pinarai Vijayan,

Actually, Chandrababu Naidu is uniting the opposition in the wake of Lok Sabha elections. Naidu is meeting leaders of different regional parties in this episode. She was supposed to meet Mamta Banerjee on May 21, but 'Didi' talked about avoiding such meetings till the results of the election.